The number of participants was 61, of which 25 were resident participants. All the lectures were scheduled on the first day of the workshop and all the tutorials on the second day. Dr. S.V.M. Satyanarayana, the resource person of the first day, was introduced by Harikrishnan G, state coordinator of the workshop series. The academic sessions were started right away without any formal inauguration. Dr. Satya narayana first presented the motivation for defining tensors in a particular way, in terms of their transformation under rotation of the coordinate axes. Early on, he introduced the concept of one-form to place the discussion on as general a footing as possible. He established that vector and one-form were linear operators acting on each other to produce scalars. Then he introduced a tensor of rank (m+n) as a scalar-valued function of m one-forms and n vectors. Metric tensor and its properties were dealt with in detail. In this way, after establishing the context, the definitions of the contravariant tensor and covariant tensor were introduced. Different 4-vectors encountered in Special Relativity were introduced one by one in covariant notation. The continuity equation, Maxwell’s equations and Klein-Gordon equation were re-expressed in covariant notation. The analytically demanding problem of birefringence was discussed at length. The idea of the contraction of a tensor was introduced. There was also a brief exposition of the derivative of a tensor in terms of the Christoffel symbols.

On the second day, the tutorials were conducted by Dr. S. S. Naina Mohammed. Starting from the simple examples of Einstein summation convention, he moved on to the properties of symmetric and skew-symmetric tensors, Kronecker delta function and Levi-Civita tensor and the different invariant quantities related to electromagnetic field tensor, metric tensor etc. Prof. A.Benny Cherian, Principal of U.C. College, addressed the participants informally in between the academic sessions.

A brief session after lunch was put aside for a discussion on UG and PG physics curriculum. The discussion was moderated by Prof. Shaji, Head, Dept. of Physics, Maharajas college, Eranakulam. In his introduction Prof. Shaji touched upon many aspects of theory and experiments where the existing curriculum could be improved by incorporating many innovative ideas and practices. Dr. Anila E I, Head, Dept. of Physics, U.C. college, was the local organizer of the workshop. The video recording of the classes were done by Dr. Shaju K Y, secretary of APT. These videos, along with the videos of the first two workshops, had been uploaded in youtube under the title, “Satya’s Lectures on Physics” where it would be freely available for all the students and teachers. 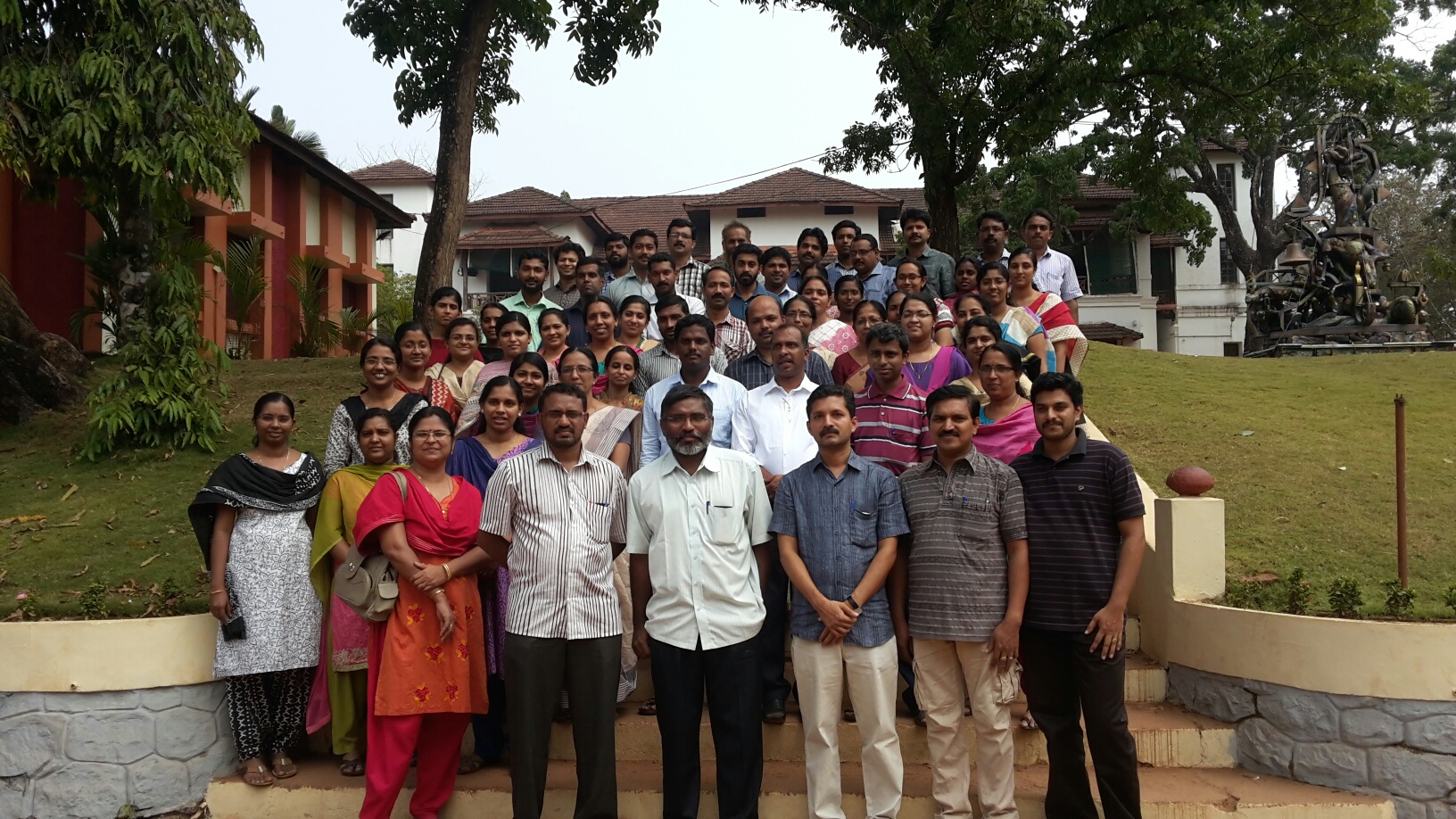 Reports of the APT Workshop Series in Theoretical Physics

The profile of physics teachers of arts and science colleges in Govt., aided and unaided sectors has been in the process of a change over for the last decade and within the next few years it would be exclusively composed of young generation. They are keen on learning the subject in depth, acquiring new teaching skills and adapting themselves to the new era with equal emphasis on teaching and research. It is to address the needs of this young generation of physics teachers and equip them attain mastery in their subject matter and vocation that Academy of Physics Teachers (APT) has envisioned the Workshop Series in Theoretical Physics. This series will span all the fundamental theoretical areas being taught at the PG level. There will be one weekend workshop (Saturday & Sunday) every alternate month, 3-day workshops during Christmas, Onam and summer holidays. All the resource persons collaborating in the realization of this series are adepts in both the understanding of the subject matter and the skill in transferring their knowledge to the audience. On each day of the workshop, there will be lecture sessions for the presentation of the topics and tutorial sessions for problem solving and discussions so that the participants would get sufficient opportunity to clear their doubts. The topics to be discussed in each workshop and the text books to be followed would be announced in advance and it would be advantageous to the participants if they come prepared by going through the relevant reading material. These workshops can play a crucial role in generating academic excellence among the young teachers. It is hoped that anyone interested in expanding one’s knowledge base in physics and fine tuning one’s teaching skills would be motivated to attend this series. The plan of different workshop series is in the following order : I. Mathematical Physics, II. Classical Mechanics, III. Quantum Mechanics, IV. Statistical Mechanics, V. Electrodynamics and VI. Solid State Physics.

The workshop was inaugurated by Rev. Fr. Dr. Jose Thekkan C.M.I., Principal, Christ College, Irinjalakuda. Dr. Satyanarayana addressed the gathering pointing out the uniqueness and significance of this workshop series launched by APT. Prof.V P Anto, Head in charge of the Dept. of Physics presided over the function. Dr. Shaju K Y, Secretary of APT welcomed the gathering and G Harikrishnan, state coordinator of the workshop series, delivered the vote of thanks. There were 43 participants out of which 22 were resident participants. They had come together from different parts of the state and three of them were from Karnataka. The video recording of the classes were done on both days.

On the first day the classes started with the discussion on the motivation for the invention of complex numbers. It proceeded to stereographic projection and then on to analytic function. The alternate way of stating Cauchy-Reimann conditions, in the form of ∂f∂z∗=0∂f∂z∗=0, sparked some interesting discussions.The logical progression from Cauchy integral theorem to Cauchy’s integral formula and finally to the definition of the derivative of an analytic function was systematically established. Taylor and Laurent series expansions were discussed in detail. Lecture sessions on the first day ended with the classification of different types of singularities and the calculation of residue. During the tutorial sessions, many standard problems that are frequently being asked in the PhD entrance examinations and interviews, like finding the real and imaginary parts of ii√ii, were analyzed. Many of the problems were directly connected to different physical phenomena. The second day began with the exposition of analytic continuation and then contour integration. Five major types of contour integration were taken up one by one and analyzed at length. Multivalued functions, branch points and branch cuts were then discussed. Green’s function method of solving the inhomogeneous differential equation was illustrated by the problem of forced oscillator and quantum theory of scattering. In both cases, the evaluation of the Green’s function involved contour integration. In the tutorial sessions, examples involving multivalued functions were considered.

The participants were supplied with the LaTex and pdf versions of the notes on Complex Analysis prepared by Dr. P. D. Shaju, Dept. of Physics, Christ college, Irinjalakuda.

The workshop was inaugurated by the honourable Vice Chancellor of Mahatma Gandhi University, Dr, Babu Sebastian. The principal of the college, Rev. Fr. N V Joseph presided over the function. Dr. Satyanarayana and Dr. Shaju K Y talked on the occasion. Dr. Ison V Vanchipurackal, the local organizer of the workshop, welcomed the gathering and G Harikrishnan delivered the vote of thanks. There were 25 participants out of which 11 were resident participants.

On the first day the discussion began with the definition of linear vector space. Different classes of examples of linear vector space were subsequently discussed in detail, each class further consisting of many sub-classes. The real line, the set of n x n matrices, the set of all polynomials on a plane, the set of all solutions to the n-th order linear differential equation, the set of all periodic functions etc. are some of the classes of examples analyzed in detail. Concepts like linear independence, span, sub-space, direct sum and direct product of vector spaces etc. were introduced methodically. On the second day, starting from the several ways of defining the norm of a vector, the discussion proceeded to inner product, orthogonality and Gram-Schmidt orthogonalization procedure. Special functions were shown as naturally emerging from the Gram-Schmidt orthogonalization of monomial basis, depending on the choice of the domain and the weight factor. In contrast to this, the reciprocal basis in solid state physics was shown to be the consequence of demanding a change of basis from the direct lattice set to another non-orthogonal set that enables the determination of the expansion coefficients. Completeness of the basis set as well as the completeness of the vector space were minutely established. At this stage, the idea of linear transformation and the four distinct vector spaces associated with every linear transformation were introduced. The third day began with the listing of the different types of matrices and their properties. Inner product and outer product were further considered using the Dirac’s bra-ket notation and the significance of the projection matrix or projection operator was brought out. Linear operator was formally introduced. The consequence of the change of basis on the vector space and the linear operator was established. The idea of the similarity transformation of the linear operator during change of basis led to the discussion of the diagonalization of a matrix and its significance under the change of basis. As the last topic, the different rules of solving a set of linear algebraic equations and their relative merits in machine based computation were discussed. Throughout those three days the participants had the wonderful experience of looking at diverse areas of physics under the over arching theme of linear algebra. The workshop was a celebration of the wonderful breadth and reach of this subject.

On the second and third days, there were short sessions on the Introduction to LaTex taken by Dr. Shaju K Y. If more participants show enthusiasm, such short sessions on diverse skills can be incorporated into this series as and when time permits.

Remaining workshops in Series I

Workshops in Series II : Classical Mechanics [topics will be announced in a few days]